Advantage Fiber VS CO2 in the Laser Cutting Battle 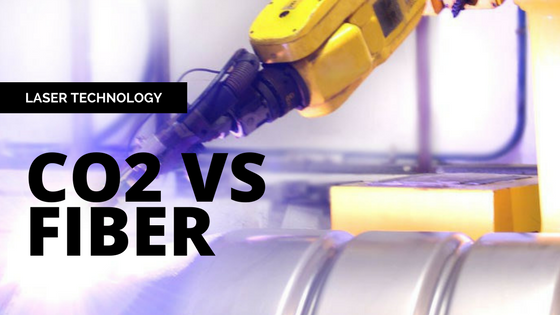 We were talking about fiber lasers recently here on the shop floor, when this quote came to mind (after a quick Google search we learned that it is attributed to Shakespeare!): “Uneasy lies the head that wears the crown.” The point Bill Shakespeare was making is that it’s all very well being top dog but watch out because someone wants to take your place.

So what’s the relevance to laser cutting? Well the laser cutting machine industry may lack Shakespearean shenanigans but it still has a king being threatened by an upstart. In this case it’s CO2 technology that has ruled for a long time, but is coming under threat from fiber lasers.

If you’ve been following along you will have seen, “The Hype about Direct Diode Lasers,” posted here back in June. In that posting we talked about how this new generation of lasers promises to shake up metal cutting. Before that happens though, it looks as though fiber will take over from CO2. Here’s why, starting with a simplified explanation of those two technologies.

CO2 lasers are so-called because the laser light is generated in a tube containing carbon dioxide gas. Nitrogen gas is introduced in a way that makes the nitrogen molecules collide with the CO2. These collisions release photons of light. Combining and magnifying them in a resonator produces a beam of collimated light with a wavelength of about 10 microns. That’s far into the infrared spectrum, which makes it invisible and also very good for heating. That light is then directed to the cutting head by a system of mirrors and galvanometers.

Fiber lasers create the beam of light the same way – by stimulating emission of photons – but without the gas. Instead, light is shone into an ytterbium-doped fiber. That releases photons just as the CO2 collisions do, but the resulting light has wavelength around 1 micron. Mirrors and galvos could deliver the beam, as in a CO2 laser, but a fiber delivery system is more common.

Eliminating gas with all it’s pipes and pumps makes the fiber laser smaller than a CO2 laser of equivalent power, but that’s not fiber’s only advantage. The light generation process is more efficient with less energy being wasted as heat. That’s why CO2 lasers need chillers whereas fiber ones do not. (Or can get away with a much smaller unit.) It also means more of the input energy is converted to cutting energy.

For a CO2 laser the gas is a consumable that the fiber laser doesn’t need. That, combined with higher efficiency and lower maintenance demands, makes a fiber laser less expensive to run. Some people suggest the hourly cost of fiber is around half that of a CO2 laser.

The wavelength of light produced by a laser has a big impact on how it cuts. The shorter wavelength of fiber produces a more tightly focused spot. That lets it cut thinner materials much faster than is possible for CO2. However, as the material gets thicker the speed difference diminishes. When steel is thicker than around 1/4” the CO2 laser is often faster.

Wavelength also affects the type of metal a laser can cut. Copper, aluminum and brass tend to reflect longer wavelength light more and absorb less. As a result, fiber has a distinct advantage for cutting these shiny materials.

It’s more than half a century since the laser was invented, and scientists keep on improving it. At Wiley our CO2 lasers are providing “yeoman’s service,” to use another phrase from The Bard, and we plan to keep using them. As we agreed on the floor though, there’s a good chance their replacements will be fiber machines.