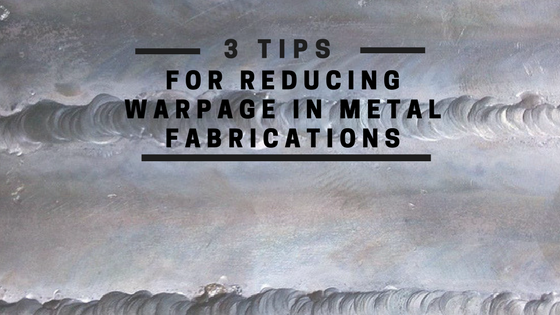 To the short list of life’s certainties – death and taxes – we metal fabricators add a third item: welding distortion or warpage. No matter how extensive your preparations or how much care you take, any time you weld you’ll get some distortion. We discussed this in, “Weld Distortion Sucks, But You Should Probably Know More About It Than That,” but it’s such a big part of fabrication that we’d like to dive deeper. (And this won’t be the last time we bring it up either!)

It’s all down to two properties possessed by every metal: thermal conductivity and the coefficient of thermal expansion.

You probably remember the grade school explanation of expansion. This went along the lines of, “Hot atoms are more energetic, so they need more room.” Meanwhile, conductivity is how those atoms pass that thermal energy along to their neighbors.

Arc welding, (MIG and TIG) entails fusing a filler metal with the materials being joined. When welding steel this weld bead is laid down at around 2,500°F (1,370C). That heat spreads out, making the metal expand. Then, as the bead cools and solidifies it contracts, but by this time the metal pieces are fused together. What happens next is twisting and buckling as they warp to minimize the internal stresses.

Metals with high conductivity, such as aluminum and copper, tend to warp less because the heat spreads out quickly. As a result, the expansion happens over a wide area, and so too does the contraction.

Where life gets “interesting,” (that’s not the word our welders use,) is when a metal has low conductivity but a high coefficient of expansion. Stainless steel is a particular challenge. Stainless sheet tends to warp a lot when welded. Given a choice, it’s something we’d prefer to avoid.

What can we do about it?

Here’s a list of tips that help reduce warpage in sheet metal fabricaitons:

These methods help reduce the extent of warpage in welding, but a better approach is to design it out.

Prevention is better than cure, and in similar vein, it’s best to design in a way that minimizes the impact of warpage. This takes a designer with specialist knowledge of the welding process. Someone with a good feel for how a sheet metal fabrication will distort can figure out the best places to put those welds. (Textbooks say to put welds on the neutral axis, but it’s not always obvious where that lies.)

If you’re comfortable designing your fabrications and just need an Indiana metal fabricator to turn them into reality, that’s great. Send those prints to us. But be aware, if our welders or engineers anticipate problems we will ask about the possibility of making changes.

Alternatively, if you’d rather do the concept work and let us handle the details, that’s great too. Our designers will determine how to minimize the effects of warpage in welding, while still maintaining functionality and appearance. In fact, however you want to work with your favorite Indiana metal fabricator, we’ll be there for you.

You could even count that a fourth of life’s certainties!