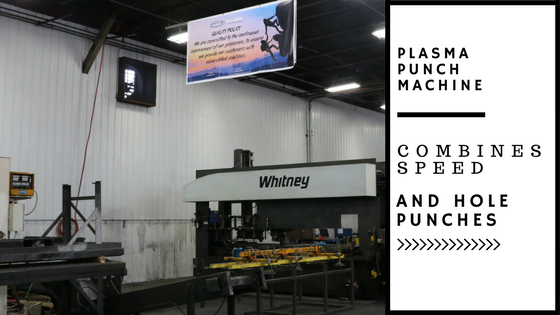 We have two options for producing shapes from plate: laser cutting or our plasma punch machine. Laser cutting is clean and elegant and still has a science fiction aura despite having been around half a century. Plasma on the other hand is much more elemental. There’s a blinding arc of light that literally burns through the material with gas blowing away the dross. But despite the sexiness of lasers, plasma cutting is often the more cost-effective option.

The laser cuts with light. Admittedly, it’s infrared light, so you can’t actually see it, (and you wouldn’t want to if you could,) but that just adds to the mystique of the process. On thin material that doesn’t reflect much light laser cutting is very fast. The kerf is narrow and the edge quality very good. When you get to plate material (thicker than 1/8” (3mm)) the laser slows down. As the plate gets thicker still the edge can develop a slight radius, depending on where the beam is focused most tightly.

We went into some detail about how this works in, “Why We Added a Plasma Punch Machine to our List of Machinery”. In summary, it’s similar to welding. An electric arc is struck between an electrode and the workpiece. This melts the metal and a gas jet blows away the molten material. Edge quality is rougher than you get from laser cutting, and the precision is not quite so good because the arc can wander a little.

A laser cuts regular carbon steel quickly. Our 4kW Mazak can run at 50 inches per minute (ipm) and sometimes faster on ½” thick plate. That’s about the same speed, maybe even slightly faster, as you’d see with plasma cutting. However, feed it aluminum or stainless and the picture changes. On a 3/8” thickness of these materials the laser only manages some 20 ipm. The plasma cutter on the other hand is around 30 ipm on the stainless and maybe 50 ipm on aluminum. (That’s because aluminum melts at a much lower temperature.)

Linear cutting speed isn’t the whole story though. The plasma punch is really two machines in one: a plasma cutter and a turret punch. And that’s what makes it the fastest way of cutting out some shapes.

The key to the speed of this machine is its punching capability. While both plasma and laser cut in a linear direction a punch removes a whole slug of material in one go. So if you’ve got a part with lots of internal holes – picture truck trailer underbody and suspension components – a punch can put in the holes in a few seconds, leaving the plasma cutter to work its way around the periphery.

Another good example would be cutting out parts for dump truck bodies. Whether steel or aluminum, these are invariably made from thick plate. While major components are often welded, holes are needed to fit various attachments. So plasma cutting produces the outline while the punch makes the various holes. In addition, the punch can make shapes like countersinks, dimples, louvers and even tread patterns.

Laser cutting and plasma cutting are similar operations. Plasma can be faster on some materials but leaves a rough edge that may need some clean up. However, combining the plasma cutter with a punch press results in a machine that quickly cuts complex shapes from thick plate. That’s why cost-effective fabricated steel parts begin life on the plasma punch machine.