Four Ways of Preventing Rust in an Overlapping Weld Joint 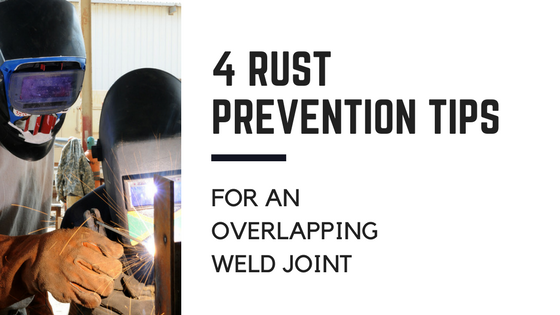 Steel loves oxygen but whenever the two get together there’s trouble of the corrosive kind. Atoms of O bond to Fe, and the result is rust that flakes away, quickly destroying your steel fabrication. That’s why we strongly encourage a protective coating. Powder, paint or galvanizing can all do the job, but if your design incorporates an overlapping weld joint there’s a good chance the red devil will soon raise his ugly head.

It doesn’t have to be like this. There are methods of making overlapping welds with excellent corrosion resistance and we’re going to list some here. Before we do that though, it’s important to discuss why weld rust can so easily get a start at an overlap.

The two plates will look as though they’re in complete contact but in reality there are crevices between them. Moisture will surely find a way in and pretty soon oxidation is underway.

This puzzles a lot of people as galvanizing is supposed to prevent corrosion. Well it does, but only where the liquid zinc can penetrate. Where you have small crevices – and small means less than 3/16” – the zinc is just too viscous to find a way in. Making matters worse, the less viscous cleaning chemicals can penetrate and do their job, so you have bare metal exposed to the air. A perfect recipe for corrosion!

Your overlap joint certainly has two sides, and possibly four. The idea of a seal weld is to seal up the overlap area. This means putting a weld bead along the edge opposite the main weld, and along any other open edges. The thing to remember though is that these aren’t structural welds. Their purpose is to seal up the gap between the two plates.

Two caveats are needed here before you strike that arc. First, think how the new weld joint will expand and contract. Additional beads may lead to distortion in unexpected directions. Second, you could be altering the load paths, possibly overloading these seal welds. In short, think about the consequences before seal welding an overlapped joint.

Yes, use caulk to fill the space between the plates. This prevents corrosion by excluding moisture. Again though, there are other considerations. In this case the issue is whether the caulk will interact with the protective finish you subsequently apply. Paint and silicone are usually an unsatisfactory combination, so choose your caulk with care.

This is widely used in the automotive repair industry, (where they also make a lot of overlapping welds.) It’s a zinc-based paint that’s applied across the overlap area. The zinc melts as the weld is made, coating both surfaces with corrosion-resistant metal.

Overlapping welds in a steel fabrication are an invitation to corrosion. Capillary action will draw moisture in between the plates, and once rust starts it’s hard to stop. The best approach is to just not use overlapping welds but sometimes there’s no good alternative. For those cases consider seal welding, caulk or weld-through primer.