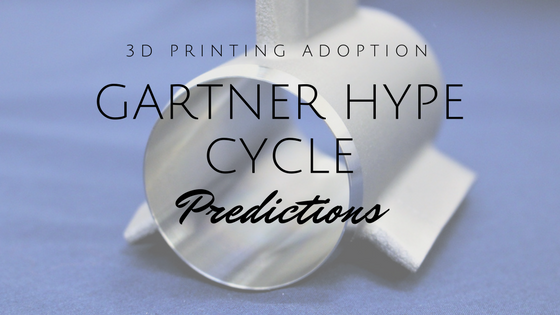 Remember 3D TV? Virtual Reality? Drone delivery services? Not long ago we thought they were the Next Big Thing but they’re pretty quiet just now. Most likely they’ve fallen into the “Trough of Disillusionment” that typically follows the “Peak of Inflated Expectations.”

No, we’re not making up these terms; they’re phases of the “Gartner Hype Cycle.” This describes how new technology goes from invention to mainstream. Looking at where a new technology is in the cycle offers an insight into when we might all be using it. Here’s more about the Hype Cycle and where 3D printing sits on it today.

Gartner and Their Cycle

Gartner is, to use their words, “… the world’s leading research and advisory company.” They provide information about technology trends for business leaders.

Back in 1995 one of their analysts noticed that many new technologies followed the same pattern. When a new invention was announced everyone would get very excited and start looking for applications. Pretty soon it seemed this new technology was going to solve all our problems. That’s the step from the “Technology Trigger” to the “Peak of Inflated Expectations.”

When everyone figured out the limitations, that lead to a drop in interest – the “Trough of Disillusionment.” Typically though, a few diehards would keep working on it until the technology really had some practical applications. The “Slope of Enlightenment” is when those emerge, a few of which go on to become really useful – the “Plateau of Productivity.”

How Mainstream is 3D Printing?

Midway through 2017 Gartner published their annual assessment of 3D printing technology, or as we know to call it, additive manufacturing. Here’s a summary.

Rather than waiting weeks for mold tools, 3D printing makes it possible to get prototypes in hours. This accelerates product development, helping get new ideas to market faster, or allowing more design iterations. (Well that’s the idea but you know how management wants everything now.)

3D printing of prototypes is reportedly in the “Plateau” phase of the Gartner Hype Cycle. In other words, it’s a widely-used mainstream technology.

Applications of 3D printing are growing rapidly in both the automotive and dental sectors. (Which illustrates the broad applicability of additive manufacturing technologies.) In automotive 3D doesn’t yet have the speed for high volume production, but it’s becoming very useful in development and also for motorsport. (Those guys love the weight-saving potential.) As for dental, our guess is the ability to customize is what makes 3D so interesting.

So, in summary, these 3D printing areas will be going mainstream soon.

Down in the Trough

This seems strange to us, but Garter put 3D in Aerospace and Defense and 3D printed jigs and fixtures in the “Disillusionment” trough. We’re surprised because we can certainly envisage printing fixtures to hold parts during welding or other fabrication operations.

Also down in the trough are 3D printed electronics and bioprinted human tissue. Well that makes more sense. Those are probably some way from mainstream.

In these areas Gartner put 3D applications and technologies like powder bed fusion and 3D for Retail along with directed energy deposition and 3D printed clothing. We could probably debate exactly where those are, but they do seem a long way from mainstream.

Additive is on its Way

As we’ve mentioned before, (“CNC Processes or Rapid Prototyping?”) we’re pretty excited about 3D printing. We’d like to think we’re also realistic about what it could actually do for us. The Gartner Hype Cycle seems a good way to describe how close each particularly technology or application is to going mainstream. While we could debate their assessments, additive manufacturing is definitely coming.