Good vs. Bad:What You Need to Know About Colored Welds 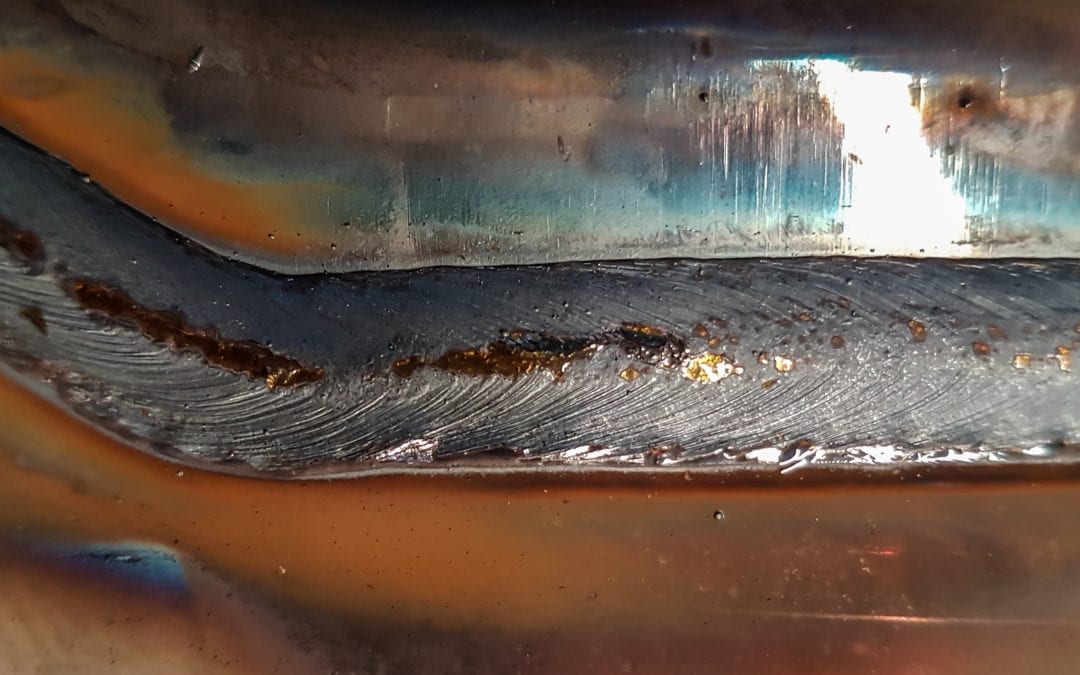 Bright colors are often a danger sign. Snakes and fungi use color to warn us away, and then there’s The Joker. Usually depicted in a purple jacket, mustard shirt and green vest that matches his hair, we know he’s nothing but trouble.

It’s the same with welds in stainless steel. Sometimes these display colors ranging from a faint straw tint to a red or dark blue. Lighter tints can be okay in some applications, but dark shades always signify problems in the weld. Here’s what you need to know.

Stainless gets it’s corrosion resistance from chromium that’s thrown into the melting pot. Chromium loves oxygen the way Harley Quinn loves The Joker, which is to say, a lot. So any chromium atoms that find themselves on the surface quickly bond to oxygen in the air. This creates an oxide “skin” that stops the iron from bonding with oxygen to create rust. (It needs a minimum of 10% chromium to create this effect.)

The cool thing about this corrosion resistance is that it’s self-healing. Scratch a piece of stainless and newly exposed chromium quickly links up with oxygen to form a new skin.

Welding recreates how iron and steel are formed. Iron ore and various alloying elements are melted together and the metals combine while waste or “slag” floats to the top of the pot.

Weld stainless steel and this happens again in the weld pool. The problem is that chromium has this really strong affinity for oxygen. Any coming into contact with oxygen is immediately oxidized rather than being incorporated back into the metal mix. As the metal solidifies this leaves a layer of chromium oxide on the surface and a region lacking chromium immediately below.

Shine a white light on chromium oxide and you’ll see colors. That’s why potters use it as a pigment for ceramics. With a very thin layer you’ll see light shades, like a kind of straw color. As the layer gets thicker so the colors get darker, progressing through reds and greens until you get to dark blue.

Depending on your point of view, welds displaying these colors might be beautiful or spectacular and some sculptors strive to achieve them in their work. Another place welders like to see them is in hot rod cars and motorcycles where the colors add drama to exhaust headers and pipes.

Metal fabricators like us have a different opinion. We view colored stainless welds as spectacularly bad. Those colors tell us chromium has migrated to the surface, leaving behind a chromium depleted region.

Stainless steel without chromium is just steel, and steel likes to rust. So here’s the bottom line: when you see colors in a stainless steel weld, or the neighboring heat affected zone, it means the corrosion resistance has been reduced in that area. And the darker the color, the worse this is.

Lighter Colors May Be Acceptable

The significance of this chromium depletion depends on the end-use of the fabrication. In some industries a little light color is acceptable. Others won’t allow any at all. ASME-BPE Standard, section MJ, offers some guidance on this.

Color in welds are often called a “heat tint” but that’s a bit of a misnomer although temperature does play a part. Around the weld pool a shielding gas excludes air to prevent oxidization. However, a hotter weld has a larger weld pool and needs longer to cool down. In this situation it’s possible the welder has advanced the torch before the pool has completely solidified, so letting oxygen in.

Another factor is the shielding gas itself. If it doesn’t completely exclude oxygen from the weld pool you’re going to get oxidization. That might happen if there’s a lot of turbulence in the gas stream, which is why some welders use a “lens” that “focuses” the gas onto the weld.

You specify stainless for it’s corrosion resistance. Make a poor job of welding it and you’ll create colorful welds. And just as with snakes, fungi and The Joker, color tells you it’s bad.