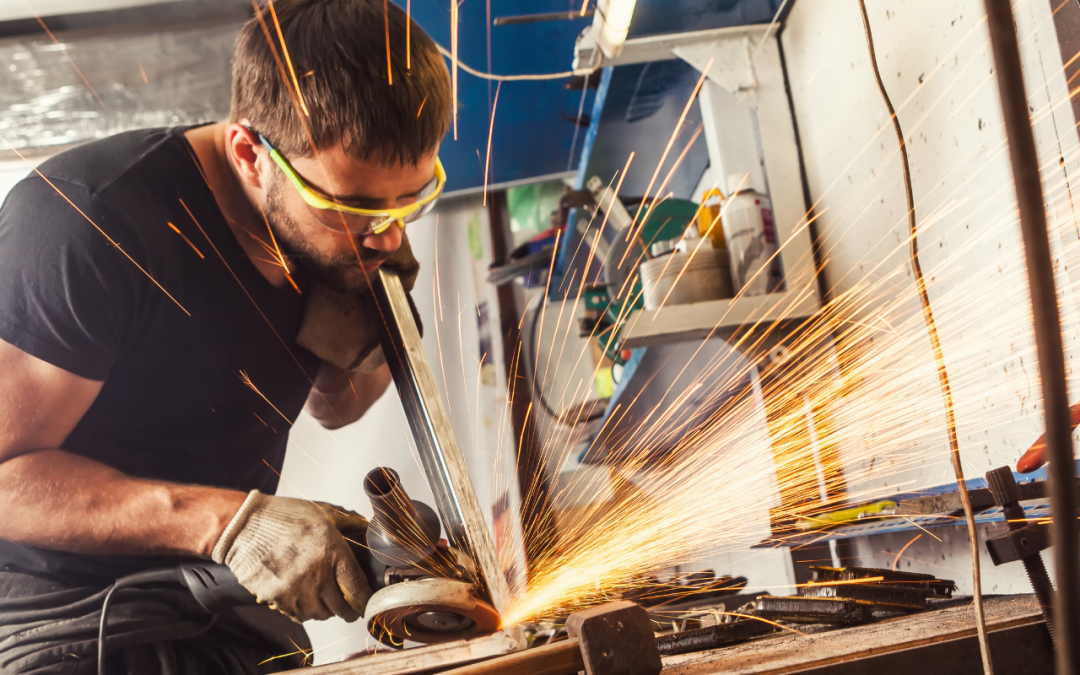 At this point perhaps you realize it’s only cutting on half the strokes. That seems rather inefficient. Is there a better way?

Well of course there is. That’s why this piece is titled, “Saw vs. Angle Grinder” (and it has nothing to do with the gruesome 2004 movie, “Saw.”) Here we’ll delve into the different options for sawing, talk about the key features of angle grinders, and discuss when one might be better than the other.

A saw blade has a line of sharp teeth, each one shaped to shave off a sliver of material. Tooth geometry is very important as it’s related to metal removal rate and material properties. Ideally, you’d use different saw blades for cutting wood, plastics, ceramics and metals.

Bigger teeth remove material faster but such a blade gets difficult to control when cutting thin material. Good practice is to have at least three teeth in contact with the workpiece all the time, so that can force you to use a fine-toothed blade.

There’s also the issue of kerf – the cut width. Bigger teeth are thicker and cut away more material. So that large-toothed saw might cut faster but it chews up more material. Depending on what you’re cutting and why, a slow, small-toothed blade could be more cost-effective.

Hand saws use the reciprocating action we described in the introduction, and there’s an optimal length for the blade. Too short and your arm is stabbing backwards and forwards uncomfortably. Too long and you just can’t use all the teeth. Plus, it’s a rather inefficient process.

A rotary or circular saw is far more efficient. This is cutting all the time it’s in contact with the workpiece. Circular saws split into chop saws, so-called because they are moved up and down in a chopping motion, table saws (where the blade protrudes through the machine table, and miter saws.

This last type are basically chop saws angled to cut a miter joint in section, typically at 45 degrees. With the chop saw the workpiece is clamped in place horizontally and cut to length. One advantage is that by putting the material up against a stop it’s possible to cut a whole batch of material to the same length. However, the radius of the blade has to be bigger than the thickness of what you’re cutting.

If you’re going to saw a thick steel billet you’re probably better off with a bandsaw.

A horizontal bandsaw uses gravity to push the moving blade down through the workpiece. You’ll see this type of saw in metal machining shops where they cut billets to length but it’s less common in the fabrication world. One advantage is that it can be left running unattended, but the downside is that it occupies more floorspace than a vertical bandsaw.

An angle grinder is a hand-held power tool used for cutting. Typically, the motor, which can be electric or pneumatic, is in the handle body. The cutting wheel is mounted perpendicular to the motor axis with shaft rotation being transferred through 90 degrees. (Presumably that’s where the “angle” comes from.)

Many different types of cutting wheel can be mounted on an angle grinder but they’re all essentially grinding wheels. Rather than having clearly differentiated teeth around the periphery they have a grit. Some are all grit while others have grit bonded to the edge of a steel carrier.

The actual cutting mechanism is the same as it is for sawing: each grit particle acts like a miniature tooth, shaving away a tiny piece of material. There are however some significant differences.

First, an angle grinder spins much faster than a circular saw, perhaps 6,000 rpm or more. Thus while each grit particle removes very little material, collectively they can remove a lot in very little time.

Second, the grinding wheel wears down as grit particles are torn out of the matrix holding them together. This is in contrast to a saw blade that just becomes dull over time.

No one saw does it all. Instead, it’s “horses for courses,” as jockeys like to say, (allegedly.) In other words, some sawing jobs need a reciprocating saw, some a bandsaw, some are done best with a circular saw, and for others it’s angle-grinder time. So how do you decide which to use? Well let’s talk about what we do in our shop.

For cutting a batch of tube, bar or section to length we’ll generally go for a circular saw. There is a bit of setup time, but once the stops are positioned it’s a fast and repeatable process. In our shop, in addition to a couple of Scotchman chop saws we also have a Elumatec double miter saw. On this we can clamp a piece of section in place and cut angles at both ends. It’s fast and accurate but again, there is some setup.

Our vertical bandsaw is used more for cutting shapes than cutting to length. There’s not a lot to set up but it takes some practice to use and it can be hard to make straight cuts.

So when does the angle grinder come out? Well this gets used for quick cutting-off jobs where speed is important but accuracy and straightness aren’t. One example would be cutting a bolt down to length. For another consider cutting a notch into a steel section for pipe or cable relief. Places where we wouldn’t use it though are for making clean, straight cuts in sheet metal or cutting tube, section and bar to length precisely.

The Tool for Quick Cuts

An angle grinder is essential in every fabrication shop. It’s a fast and easy-to-use tool for cutting things, but it’s not a precision fabrication tool. When we need clean, accurate cuts we’ll take the time to set up the chop or miter saws.

As for “Saw” the movie, well one became a whole franchise, culminating in “Jigsaw”. That’s a type of reciprocating saw we skipped over here – they’re mainly used by DIYers – but as for whether “Bandsaw” is in production, well you’ll have to wait and see.