Painting Your Fabrication? There Are Standards for Surface Preparation 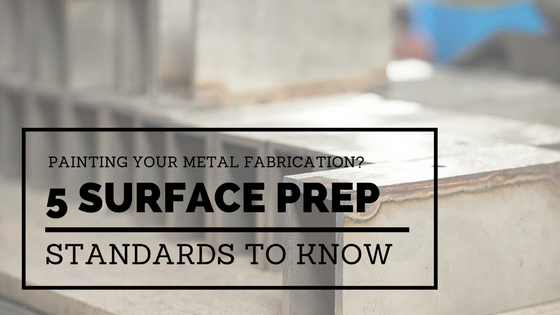 There’s a steel railroad bridge that links England to Scotland. It crosses an inlet from the North Sea called the “Firth of Forth” so the bridge is the Forth Bridge. Being on the coast, the air is quite corrosive and the bridge needs regular repainting. In fact in Britain “painting the Forth Bridge” is an expression for any never-ending task.

Repainting any metal fabrication is expensive, so anything that extends the life of a coating is worth considering. High quality paint and skilled application are important but good preparation matters most.

Getting Paint to Stick

As we mentioned in, “There’s Science To Painting Metal Fabrications,” paint adhesion is one of those mysteries no one quite understands. What’s clear though is that it needs a clean surface. If rust or scale are present the paint just sticks to that and soon flakes away. Oil and grease are an even bigger problem, repelling paint so it won’t stick at all. The only way to create a good bond between paint and metal is thorough preparation to provide a good key for the paint.

There are several ways to prep a fabrication for paint after welding. For removing rust and scale from smaller parts sandpaper or a wire brush might do the job, or switch up to a wire or abrasive wheel to get the job done faster. Bead or grit blasting is the industrial way of preparing a large weldment but even that won’t rid a surface of oil or grease. The only way to do that is with a solvent.

Then there’s the question of how thoroughly to prep. Do you just run the brush over once to remove loose particles or blast the surface until you couldn’t find a molecule of rust with an electron microscope? And once you’ve figured out what you want, how do you communicate that to your friendly metal fabricator? Well this is why we have standards.

Surface preparation standards help fabricators, painters and their customers define how much preparation to perform. While there is an ISO standard, (ISO 8501) within the US we most often use the NACE/ SSPC Joint Surface Preparation Standards. You’ll see these defined as SSPC.SP1 through SP11 or NACE 1 through 4. Confusingly, these don’t line up perfectly, and the NACE standards don’t tie the number to the level of surface cleanliness. In general though, the levels of surface preparation are:

More thorough preparation leads to longer coating life. However, that thoroughness costs money, so rather than automatically asking for “white metal” consider what the fabrication needs.

For example, if the cost of failure is high and the environment is corrosive, thorough prep may be a wise investment. Conversely, if you have a structure where failure costs are low, it’s under cover and is easily accessed for repainting, perhaps there’s no need to pay for the highest levels of prep.

Standards Can Save you money

A steel fabrication should always be painted to extend its life, but coating durability depends on how well the surface is prepared. If you don’t want to pay for more preparation than you need, take a look at the surface prep standards and think about how often you want to repaint.

As for that bridge, 120 years after it was built they’ve finally finished painting it. According to a BBC news report, the secret was a special epoxy paint that should last 25 years. We suspect there was some very thorough surface preparation too!