Why Ductility is Important in Metal Fabrication 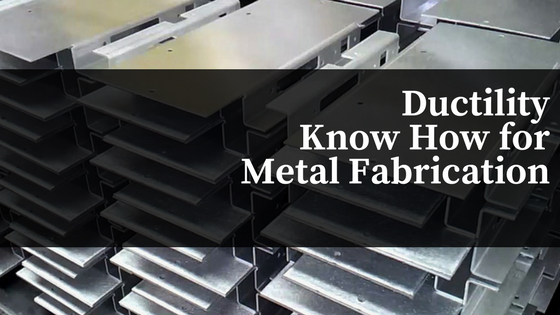 Remember Clippy, the annoying paperclip “assistant” Microsoft imposed on us with Windows 98? You’d type the first few words of a letter and Clippy would pop up in the bottom right corner of your screen, asking if you needed help. Many of us had fantasies about twisting Clippy round and round until finally it broke. (If you’re too young to know what we’re talking about, congratulations! Enjoy your youth while you can!)

The point we’re making here is that paperclips are pretty ductile, and ductility is something we pay close attention to in metal fabrication. Here’s a few words about metal ductility and why it matters.

Glass and ceramics are brittle. Drop them and they’ll shatter. Ductility is the flipside of brittleness. It’s the ability of a material to deform without fracturing. For a material to be ductile the crystal structure must allow some movement when placed under load.

Temperature and deformation speed also have a bearing on ductility. Take rubber and plastic for example. At room temperature these bend easily, but in extreme cold they’ll snap without bending. That’s because the polymer structure is unable to move to handle the load imposed. Likewise, bend it too fast and it snaps rather than deforming.

Metals have a different structure to plastics, but respond to load in a similar way. And like plastics, they have an elastic limit. That’s the deformation beyond which they’re unable to spring back to their original shape. Keep applying a tensile load and you’ll see both plastics and metals neck down before fracturing.

Bending metal, as we do on a press brake, needs the metal to be ductile. It also takes a feel for the speed at which it can be deformed. Bend it too fast and it will crack. (Grain structure is also a factor here. The sheet behaves differently in X and Y directions, due to how the rolling process deforms the crystals.)

Conversely, if we’re punching metal ductility is a bad thing. Rather than bend around the punch we need the metal to fracture as it’s hit. (That’s one reason punch presses work quickly.)

There are two parameters commonly considered in deciding how a metal will behave during fabrication: hardness and tensile strength. In general, harder materials are less ductile and more likely to fracture. The connection between ductility and tensile strength is a little less clear.

Tensile testing just tells us how much load it takes to cause a fracture. It doesn’t reveal the deformation that takes place before fracture, which is what would indicate ductility. For that we need a forming limit diagram.

The forming limit diagram shows how a material responds to deformation. It’s produced by deforming a sheet of metal over a dome. Circles etched into the metal show how it will move in every direction.

Once we understand a material’s ductility we can figure out how to bend it to the form we want. We know how much deformation it will take before necking, and how far we can move it before it starts to crack.

Every metal has a different level of ductility, depending on how it’s been processed or treated and what condition it’s in. As fabricators it’s essential we understand the ductility of metal every piece of metal we work with because that tells us what we can do with it.

As for Clippy, we’re happy to say he’s long gone, and not missed one bit.