Why is Sheet Metal Thickness Measured In Gauge and Not Inches? 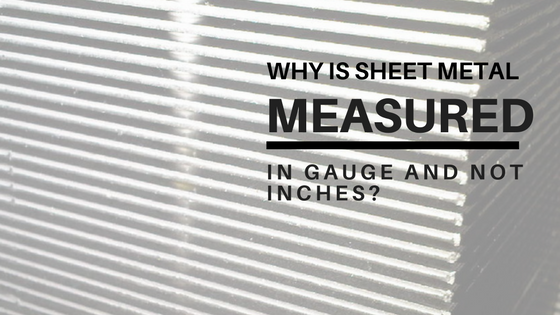 Some things are hard to understand. Movies about time travel are one, specifying sheet metal thickness in gauge numbers is another. Now we’re metal fabricators, not quantum physicists so let’s jump straight to the second one and talk about gauge.

Here in the US we measure in feet and inches, unless we’re talking about the height of horses or the thickness of sheet metal. Then we use hands for horses and “gauge,” written as “ga”, for metal. Gauge is a dimensionless number sometimes spelled “gage.” and confusingly, it works backwards. Usually a bigger number means there’s more of something but 18 gauge steel is thinner than 16ga, not thicker.

Sheet metal is specified in gauge, so rather than design in fractions of an inch you should really be specifying ga on part prints. You should also know about gauge when discussing sheet metal with your friendly Indiana-based metal fabricator. That way, if we suggest something like switching from 14 to 16ga to tighten a bend radius or save weight, you’ll know what we mean.

You can find a gauge-to-inch conversion table at several places online. While looking at those you might also notice that the conversions are different for metals other than plain steel. That’s because gauge is derived from weight.

Using “gauge” as a measure of thickness goes back to the beginning of the industrial revolution. Wire drawers (people who produce wire,) needed a way of quantifying what they were selling, and the easiest method was weight. But just asking for fifteen pounds of wire without specifying the thickness wasn’t very helpful, so the drawers would quote diameter based on the number of draws performed, and this became the gauge. This is also why a higher gauge number correlates with thinner material. Each drawing reduced the diameter, so more drawings meant thinner wire.

As steelmakers started rolling their product into sheet they found it was easier to measure weight than thickness. So, similar to wire, sheet metal could be sold at a weight per unit area, with thinner material weighing less per square foot. The easiest way they found to specify sheet thickness was the gauge number system of the wire drawers.

Back in the 18th and 19th centuries standards were pretty much nonexistent. Instead, each manufacturer developed their own. Over time though these were harmonized, bringing about Standard Wire Gauge (SWG) for wire, Manufacturers Standard Gauge (MSG) for steel, and American Wire Gauge (AWG) for nonferrous metals.

One confusing aspect of gauge is that neither thickness or weight per unit area change by a constant amount as you move from one number to the next. In fact were you to graph the numbers you’d see what’s called an “exponential decay curve.” In other words, the difference between successive gauge numbers becomes less as gauge increases. For example, the difference between 10 and 11ga is 0.0149” while between 35 and 36ga it’s only 0.0008”.

This difference goes back to the wire drawing origins of gauge. It’s down to the amount of reduction achievable. To make thin wire the drawers wanted to reduce the cross section as quickly as possible, but there are metallurgical limits on how much can be done in one pass. So over time they determined the optimal number of drawing steps needed, which is what lead to this exponential decay curve.

Think too hard about the logic of traveling through time in movies and it’ll fry your brain. That’s why, to quote Bruce Willis in Loopers, “… if we start talking about [time travel] then we’re going to be here all day talking about it, making diagrams with straws.” Sheet metal gauge on the other hand, is quite logical, even if you have to go back in time to understand its origins.